This film is notable for having the manga creator Monkey Punch in the director's chair for the first and only time in the anime franchise. He is usually content to sit back and let people create their own interpretation of his work. While he is credited as the director, he has clarified that he only directed the opening and ending sequences, leaving the bulk of the film to be handled by more skilled hands.

Funimation released it on DVD in the US alone and in their "First Haul" box set with other Lupin films.

The latest target for Lupin is the legendary treasure of the kingdom of Zufu. This treasure lies on the mysterious "Drifting Island", and Lupin drags his gang along to investigate. Upon reaching a mysterious door, the island activates an impressive defense system, and Lupin manages to escape by the seat of his pants.

It is up to Lupin to find the key to unlock the door to the treasure. To do this, he must avoid the psychotic leader of Zufu, bounty hunters, secret police, and the indomitable Zenigata. Can Lupin unlock the secrets of the island before he ends up as a $1,000,000 trophy?!

Regarded by fans as one of the best Lupin titles created and Monkey Punch in the director's chair, my expectations were high going into this film. As the end credits rolled, the film had proved that these expectations were well founded. Dead or Alive blends the best parts of the manga and anime together to make for a fantastic film.

One of the more impressive aspects of the film was the pacing of the plot and the character development. Portions of the film focus on the relationship between the deposed Prince Panish and the Zufu female agent Oleander. Rather than slowing down the film's pace, the scenes integrate themselves between the action sequences to tell an engaging story. The action sequences are equally impressive; the island's defense system provides for some beautiful sequences that combine high-energy action with the comedic touches the manga series is known for.

Dead or Alive clearly returns to Monkey Punch's concept of Lupin with the best evidence seen in Zenigata's portrayal. Previous outings portrayed Zenigata as an obsessive and bumbling cop. However, Dead or Alive brings back the Zenigata seen in the manga – still obsessed with capturing Lupin but smart, strong, confident, and determined. While Zenigata still provides a dash of humor in this outing, it was refreshing to see him once again as a strong, worthy adversary for Lupin.

One of the plot points is a $1,000,000 bounty placed on the head of Lupin; this plot point is given little airtime making the title Dead or Alive seem out of place. However, repeated viewings have made it clear that the title is just as sneaky as Lupin and is better suited to a larger plot point in the film. This is another small but skilled touch that makes the film so great.

The film is worthy of the praise heaped upon it by fans; the only thing that could have made this film better would be if Yamada Yasuo had lived to voice Lupin. Kurita Kanichi did a great job, but you can tell he was still struggling with filling the large shoes Yamada left. If you have yet to see this film, do yourself a favor and find a copy of it as soon as you can. You are missing one of Lupin's greatest capers ever! 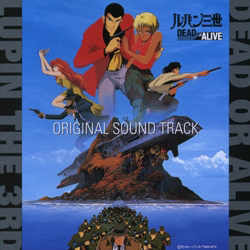