This film is notable for introducing the first new voice in the main Lupin cast since the entire cast replacement for Plot of the Fuma Clan. Sadly, Yamada Yasuo passed away on 1995 March 19 from a brain hemorrhage. Kurita Kanichi was personally tapped by Yamada to be his successor based on Kurita's nearly spot-on imitation of Yamada's style. The title of the film translates more literally as Die, Nostradamus!, but fansubbers usually referred to it as To Hell with Nostradamus!

The film was released in the US on DVD by Funimation alone and in a box set with other Lupin films titled The Final Haul.

A simple diamond heist leads Lupin into the machinations of a bizarre cult. The cult is based around the prophecies of Nostradamus, and they kidnap Julia, the daughter of Douglas, a wealthy American who is seeking the presidency, along with Lupin's diamond. At stake is the lost book of prophecy Douglas holds in the vault at the top of his skyscraper.

Can Lupin rescue Julia, find a way into the vault, and discover the connection between the cult and the kidnapping? And what about his diamond?! 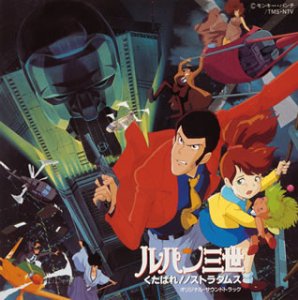