The setting is Sokai City, an ancient Asian city. On a rainy day, Fujiko asks Jigen and Goemon to meet Lupin in Sokai City. However, the city is quite popular since it will be cruelly closed in three days.

Suddenly, a mafia group known as Tenryuukai appears, and Lupin is attacked by the "assassination fist" technique... This surprise attack causes him great chest pain, and his life now has a time limit...

At the same time, a certain daughter's bodyguard visits Zenigata in Sokai City. The girl's heart and mind are shut, but Zenigata's honest struggles changes her mood.. Usually, Zenigata and flowers don't mix. But his chest is beating with passion!?

With three days of adversity left, Lupin smiles and believes this is time enough? Failure in the end means the devil!? Will Lupin reach a fateful meeting with Zenigata and the woman he guards?! Oriental feeling overflows in Sokai City, as the death and love drama begins.

Initially, Banpresto appears to have taken more care to provide richer graphics and backgrounds. You start in the back alleys of Sokai City with dust blowing around you as you explore its dingy corners. The textures are more detailed and colorful than the previous two games were, setting the atmosphere for the game quite well. As you progress through the game, the textures remain more colorful but quickly slide into sparse, repetitious areas. It looks much better than the first two games but still lacks the visual flair seen in other PS2 titles. The character models and cut scenes are fantastic and feature many small details that will catch the eye. Fujiko fans will be delighted with the subtle wiggles and jiggles on display

Any Lupin title would be incomplete without an ample dose of music. Each episode features a unique track that loops in the background, though many of them will be familiar to long time Lupin fans. Most of the in-game dialogue is contained in the cut scenes, but they do sprinkle some into the gameplay. The voice cast sounds strong and treats the material like an actual anime; they phone none of the lines in and turn in a great performance. The only knock on the title would be against the lack of ambient sound effects; you do hear your own footsteps and other noises. However, there does not seem to be enough ambient effects to add to each setting's atmosphere.

Controlling the action is smooth and intuitive; the left analog stick controls your movement. The amount of pressure you put on it determines if you walk or run. You can change the camera perspective with the right analog stick; the camera has a free range of motion rather than the limited angles the previous games allowed. Zooming in and out of the mini-map is done with a right shoulder button; the rest of the buttons control other actions such as opening doors, interacting with characters, etc. One innovation is the use of the directional pad to open a quick on-screen menu of inventory items; this allows you to quickly change disguises or use an item in motion.

Banpresto really nailed the spirit and essence of the franchise by breaking the game into "episodes" complete with typewriter episode titles and a preview of the next episode at the end. Each episode is an individual mission that moves the story along; the missions range from sneaking past guards, using Goemon or Jigen to mow down the enemy, and even a rhythm action game. Each mission will start with instructions for any special controls and movements at your disposal.

Initially, you have only one episode to select on the episode menu. Once you complete it, the menu branches off into two tracks, one for Lupin and one for Zenigata. You must complete more episodes to unlock the next set, but you can replay any open episode at any time. You can mostly play through the episodes in any order you wish, but each episode's preview provides a guide on how the writers would like you to progress. You will get more out of the story if you follow this path and watch the story unfold from both Lupin and Zenigata's perspective.

When you complete an episode, you are assigned a rank ranging from F (the worst) up to S (the best). The rank is determined by a number of factors -- how fast you complete the level, how many enemies you defeated, how much damage you took, etc. This boosts the replay value of the game immensely; rather than having to trudge through a "hard mode" upon completing the game, you can pull this title off the shelf and quickly play an episode or two for fun. Your rank also determines what bonus items you unlock, another item that adds to the replay value.

Once you have played through the entire story for Lupin and Zenigata, two more tracks open up. The story for these episodes starts the same but expands and ends quite differently. While the story changes, most of the episodes for the new tracks are identical to the previous tracks. The only difference is the level of difficulty has been ratcheted up; however, there are a few new episodes thrown into the mix. Banpresto salvages the whole situation at the end though by introducing the most amusing "character" the franchise has seen recently.

What this game lacks though is gadgets and puzzle solving; the previous two games had some Tomb Raider type puzzles. Push this box in a certain manner; unlock that door by combining a few items and using the result. For the most part, you simply creep around the level, and the only puzzling part is what answer to give a guard so you can get into the next area. Each mission is still fun, but I found myself missing the small puzzles along the way that the previous games had.

Banpresto has simplified the disguise system; once you don a disguise, you are safe from attention as long as you walk. You can walk past any guard without hassle, but be careful not to run. Running makes the guards suspicious, and they will come up and ask you a question. You are given two or more possible answers and must select the correct the answer within a time limit. Give the right answer, and you will be on your merry way. Give the wrong answer, and the jig is up! Lupin is unmasked and must run and fight his way to the nearest safe zone, the flashing red zones on your mini-map. Again, walking means you will avoid this hassle for the better part of the game, but there are a few spots where you have to be questioned by a guard in order to enter the next area.

Lupin is a lover and not a fighter; as such, he has few combat options available to him. His initial technique is a baseball slide that stuns any guards it hits; as the game progresses, he also picks up the ability to hurdle a guard and a fake Walther to freeze guards in their tracks. You can only pull your real Walther and pour some lead into the final boss.

Zenigata is a bit more capable when surrounded by the enemy. He can throw a series of punches initially but soon learns to wind up and throw a super punch to disable large groups. He adds the ability to toss someone over his shoulder and the ability to pick up and throw an enemy like a shot put. His final technique is to grab someone by their legs, swing them around, and toss them like a rag doll. This technique comes in quite handy when surrounded by a mob.

As you knock people around, you can rack up your combo count; higher combos will give you a better ranking at the end of the episode. Zenigata's rag doll throw will provide you with high combo counts if used at the right time.

These "action events" occur during the mission and require you to press a specific sequence of buttons in a set time limit. Input the sequence correctly, and you will avoid the danger and usually unlock a new combat move for the character. Get it wrong, and you will end up losing some health and look foolish.

A special menu item appears once you start unlocking content; this gives you access to the background music jukebox, the cut scene jukebox, and a special still shot section. The music jukebox is divided into sections for Lupin and Zenigata; you can unlock each episode's music by achieving an A rank or better for the episode.

The cut scene jukebox is setup in a similar manner though the mechanism for unlocking the scenes does not appear to be based on the overall ranking of the episode. Each episode ranks a number of categories, and it appears that the cut scene is unlocked by achieving a set rank in one or more of those categories.

You can unlock four special still shots by achieving an S rank for every episode on a track. If you manage to accomplish this feat, you are rewarded with a unique piece of artwork for that portion of the storyline.

I absolutely love this game and consider it the best out of the three PS2 games. It is not going to win any awards for graphic superiority or intricate gameplay, but it captures the charm, humor, and style of the anime. I do miss the puzzle elements the previous games had, but I know I will be pulling this game off the shelf occasionally to play an episode or two while the others will collect dust on the shelf. Visit the official Japanese site. 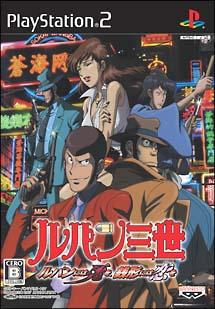