In Bastille, France, the treasure of the Bourbon Dynasty was stacked in a truck and stolen. Thinking it was undoubtedly Lupin's doing, Zenigata and the French police pursue the truck. But, the criminal was actually an unheard-of woman. Then, the true Lupin appears. Lupin successfully steals the truckload of treasure from the woman but is then mysteriously kidnapped.

Malchovich is the man who kidnapped Lupin. Fujiko is also caught and kept hostage while trying to steal the worldwide famous jewel "Bull's Eye". In order to rescue Fujiko, Lupin, along with reluctant Jigen and Goemon, tries to steal Bull's Eye from the Grand Bateau, the French museum renowned for having the greatest security in the world. Everything starts from here!

Female thief Becky, scoundrel Malchovich, and Lupin... Ambition, human relations... Each secret becomes gradually clear during the scramble for the Bull's Eye. The series' highest spectacle romance unfolds, and France is the stage! You cannot take your eyes away from this year's Lupin! 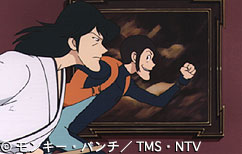 The recent Lupin specials have attempted to reinvigorate the series by adding some new wrinkles to the standard story. Episode:0 explored the past of the gang, and Return the Treasure had Lupin returning rather than stealing items. The 2004 special Stolen Lupin attempts to add another wrinkle but does not manage to fully explore it.

Lupin finds himself at odds with a thief of the younger generation, a female thief named Becky. After stealing Becky's heisted loot, Lupin finds himself captured by a mysterious crime lord named Malchovich. With Fujiko's life on the line, Lupin must steal the "Bull's Eye" jewel for Malchovich. Lupin does just that, but Becky returns the favor and makes off with the jewel.

What follows is a series of double-crosses, fighting, and mysterious connections between the characters. The film is well-paced and keeps the story flowing, but there is something lacking in the presentation. It is not a boring special and will not have you looking at the clock, but it just does not do anything to really captivate the audience. Most of the material has been covered by the series numerous times, but nothing fresh is brought to this special to distinguish it from prior work.

The concept of a younger thief to challenge Lupin and become his rival was disappointingly not developed much beyond the first act. Here was an opportunity to test Lupin and show that after all his adventures that he has not lost a step. However, Becky's involvement becomes relegated to a convenient plot device for the final showdown between Lupin and Malchovich. Stolen Lupin is not the worst special to come around, but it lacks the polish and uniqueness that is the hallmark of the great specials.