Fujiko and Lupin are enjoying a romantic dinner together; as usual, Lupin's appetites include getting a taste of Fujiko's latest plan. Fujiko has uncovered the "Columbus Files" that tell of an incredible treasure known appropriately as the "Columbus Egg". Before Lupin can learn more, they are attacked by a helicopter squadron led by Nazaroff. Lupin and Fujiko end up hanging onto the edge of a cliff, but Fujiko falls to earth after a gunshot severs the rope attaching her to Lupin.

A young woman named Rosaria is handing over a piece of sunken treasure to a buyer. She returns home to find an uninvited guest... Fujiko! However, Fujiko has amnesia and is haunted by frightening images of being chased by Nazaroff's men and of the contents of the Columbus Files. Can Lupin restore Fujiko's memories to find the Columbus Egg as well as for her own sake? And why is Rosaria determined to find the Egg for herself?

Da Capo of Love has all the standard items we have seen in previous Lupin specials; submarines, betrayal, ancient treasures that hold mystical power, mysterious relations... there is little material in the special that has not been seen previously in some form. What is different about this special is its treatment of one of the main characters. Thanks to the convenient plot device of amnesia, Fujiko spends most of the special defenseless and actually trying to help Lupin rather than cheat him.

However, it is how Lupin responds to this turn of events that is the interesting aspect of this contrived situation. With no memory of who she is or what she is capable of, Lupin must play the role of protector rather than lecher; it allows him to show the side of him that truly does love Fujiko rather than the side that lusts after her. This aspect is not overplayed to the point of being maudlin though; it appears in just the right moments and does not linger long.

The special did manage to excel in its humor as well; there were a number of amusing jokes and sight gags. Balancing action and humor is a hallmark of the better Lupin specials, and this one came close to achieving that balance. There were plenty of scenes that had me laughing out loud, but the action was not up to par. Da Capo of Love does manage to be slightly better than the average Lupin special, but it will not likely top the list of most Lupin fans. 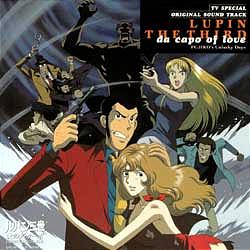